Aaron Rodgers stands by comments on Packers offense, says no one raised issue with him 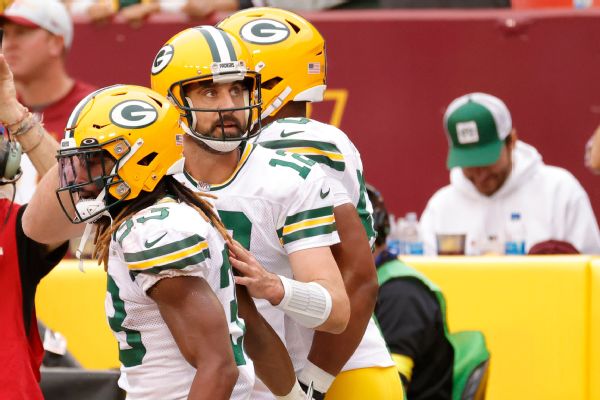 GREEN BAY, Wis. — If anyone inside the Green Bay Packers‘ locker room had a problem with quarterback Aaron Rodgers‘ assessment of their offense and who should — or should not — receive playing time, then they haven’t addressed it with him.

And not coach Matt LaFleur.

That’s according to Rodgers on Wednesday, one day after his weekly appearance on “The Pat McAfee Show” made waves because the quarterback said, among other things, that players “who are making too many mistakes shouldn’t be playing. Gotta start cutting some reps. And maybe guys who aren’t playing, give them a chance.”

Rodgers said it was nothing he hasn’t shared behind closed doors inside team headquarters at Lambeau Field.

“If one of those guys has a problem with it, I’m right here, and I’d love to have a conversation,” Rodgers said. “I enjoy those conversations. I enjoy any type of conflict like that because I know the resolution on the other side is going to make us a better unit, a better friendship, a better cohesion on the field. But nobody’s come to me and said, ‘I’ve got a problem with what you said.’ I think everybody knows, Matt included, that everything’s got to take a little uptick, get a little better.”

Nor did Rodgers back down from those comments when asked to clarify them.

“I don’t understand why people have a problem with things that are truthful,” Rodgers said. “I’m calling things the way I see it. People don’t think I need to air that stuff out, that’s their opinion. But I’m doing what I think is in the best interest of our guys, and I’ve tried a lot of different things from a leadership standpoint this year, and I was just relating my personal feelings on the situation. I didn’t call anybody out by name. I think we all need to be on the details, and that includes me.”

Rodgers said he was open to extra conversations with teammates and coaches during the week to help fix things. To that extent, Rodgers, who did not practice Wednesday because of his injured right thumb — which he would not say if it was broken or not — moved his treatment time so that he could attend practice and still call plays in the huddle. The Packers also moved up by one day their regular weekly meeting between the quarterbacks and the receivers.

On Tuesday, Rodgers told McAfee that they’ve had missed assignments or had mental errors on as many as 20% of their offensive plays in games this season, including Sunday’s loss to the Washington Commanders that dropped the Packers to 3-4 after a 3-1 start.

“If you’re not performing or executing or doing the things that you’re supposed to be doing, then I’m with Aaron,” veteran receiver Sammy Watkins said Wednesday. “If I’m not playing well and I’m freaking up and busting plays, get me out of the game because that’s not helping the team. I think that’s a wake-up call to everybody, wake-up call to myself. I try to limit myself to having one M.A. a game and that’s my goal. The goal is to have none, but things happen in the fire. I’m with Aaron, man.”

Watkins returned Sunday after a four-week absence because of a hamstring injury, and rookie Christian Watson could return for this Sunday’s game at the Buffalo Bills (5-1) after missing two weeks because of the same injury. However, they could be without Allen Lazard, who did not practice Wednesday because of a shoulder injury.

When rookie Samori Toure was active for the Washington game, it meant that every receiver on the roster has gotten a chance this season. So unless Rodgers was referring to practice squad receivers Juwann Winfree (who has one catch for 17 yards in the three games in which he was elevated from the practice squad) or journeyman Travis Fulgham (who has never played in a game for the Packers), then it’s unclear who he thinks should be playing more.

“I think it’s just, we gotta get our best 11 on the field and if that means going different personnel groups, then we’ll have to do that,” Rodgers said. “But we can’t have the same double-digit, 15-plus mental errors and expect to move the ball efficiently.”

LaFleur gave no indication that he had an issue with Rodgers’ comments.

“We have to be truthful with one another,” LaFleur said. “Sometimes the truth hurts. … I don’t think he publicly called out individuals, I don’t believe, I didn’t sit there and listen to the whole thing, so I just think that you have to get to the root of the truth.”

Green Bay opened as a 10.5-point underdog and by late Wednesday the line had moved to 11.5 at Caesars Sportsbook. Rodgers has never been more than an 8.5-point underdog in his career, according to ESPN Stats & Information research. His 234 career starts (including regular season and playoffs) are the most by any quarterback to never be a double-digit underdog in the Super Bowl era. Rodgers is 0-4, including playoffs, as a touchdown or more underdog.

“You can be a dangerous team when you feel like you have a lot to prove, and when you’re kind of counted out,” Rodgers said. “So I welcome us being counted out as much as possible. I’ve always enjoyed that feeling. And for these guys who have a lot to prove, hopefully they embrace that as well. It’s time to make a name for yourself in this league, and a lot of guys are going to get opportunities on Sunday. On national TV, with millions and millions of people watching — a great time for some of those guys to step into the limelight.”

Aaron Rodgers stands by comments on Packers offense, says no one raised issue with him