EAST RUTHERFORD, N.J. — When all is said and done, Kayvon Thibodeaux’s strip sack of Taylor Heinicke and subsequent fumble recovery for a touchdown may be the biggest play in this New York Giants season. It was certainly the biggest moment in the biggest game, a matchup Sunday night against the Washington Commanders that likely swung them into the playoffs.

It’s only appropriate that it was the defense that made the season-altering play. The unit that carried the Giants to the 6-1 start by not allowing any of their first seven opponents to top 23 points is the group that saved this season from going further south.

The Giants had won just once in their previous five games prior to their 20-12 victory over the Commanders on Sunday night at FedEx Field.

“That play that [Thibodeaux] made down there when they were backed up kind of changed the tide a little bit in the early part of the game,” coach Brian Daboll said. “He is a very talented player and he played like it.”

This is what the Giants were expecting when they selected Thibodeaux fifth overall earlier this year: A game-changing player. He had 12 tackles, three tackles for a loss, a sack, forced fumble and three pressures. His touchdown gave the Giants a 7-3 lead they would never relinquish.

It’s perhaps a sign of things to come with a healthy defensive line, which has been a rarity this season. The Giants’ front four has played a total of just 31 snaps together.

It was only the second game that all four of their top front seven players — Thibodeaux, Azeez Ojulari, Leonard Williams and Dexter Lawrence — were on the field together this year. The other game was two weeks earlier against Washington, when Williams hurt his neck in the third quarter of a 20-20 tie.

Lawrence added three quarterback hits and Ojulari contributed two more. They seemingly all made plays on the Commanders’ final drive, which came up six yards short thanks to a goal-line stand to shut down the 51-yard drive in the final two minutes.

The play of the defensive line also took some pressure off the injured Giants’ secondary. Defensive coordinator Wink Martindale blitzed on 32.4% of dropbacks on Sunday against Washington with his front four healthy. That is well below the league-high 42.5% blitz rate he’s used this season. 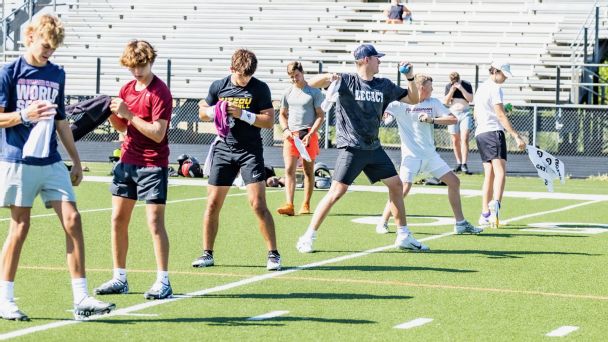 At some point, though it is unlikely to be this week, Martindale could also get back cornerback Adoree’ Jackson and safety Xavier McKinney. Then maybe the Giants really have something brewing. It’s what they envisioned when the season started.

“Every time you get a good or great player back, it helps you scheme a lot easier,” Martindale said. “Then you can either do more things with them or less things with them because they can just win their one-on-one matchups. So, it does help. You can give them different looks, too, the opponent.”

In the meantime, Martindale can work with Thibodeaux, Ojulari, Williams and Lawrence. The Giants produced their second-best pressure rate of the season (44.1%) on Sunday night with all of them on the field.

The Giants were back to being their opportunistic selves by pressuring the opposing quarterback, being stingy in the red zone and creating big turnovers. Aside from the Thibodeaux sack-fumble and touchdown, Lawrence also forced a fumble by Heinicke inside the Giants’ 10-yard line in the fourth quarter. Williams recovered.

That’s how they got here in the first place, on the verge of their first postseason berth since 2016.