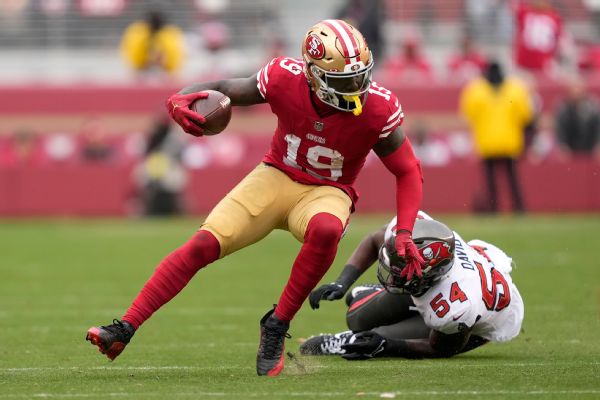 SANTA CLARA, Calif. — When San Francisco 49ers coach Kyle Shanahan spoke with reporters Monday morning, he didn’t have much in the way of injury updates on key players such as receiver Deebo Samuel and quarterback Brock Purdy.

That’s because Samuel and Purdy were among a handful of Niners still having further tests done to determine the severity of their injuries. After a few anxious hours at 49ers headquarters, they got what can only be considered positive news in the wake of what had all the makings of a devastating Sunday on the injury front.

According to the team, Samuel suffered a sprained medial collateral ligament in his left knee and a sprained left ankle. He will miss some time but there were no broken bones and he is “expected to return at some point during the regular season.”

As for Purdy, he’s considered day-day with what the team is calling a rib and oblique injury. While the Niners did not practice on Monday, they had to release an estimated injury report because they play on Thursday night.

On it, Purdy is listed as a limited participant, which is a positive sign he will be available to play against the Seattle Seahawks on “Thursday Night Football.” Purdy suffered the injury when he dived for a first down on a play that was called back for a holding penalty on San Francisco’s second drive Sunday against the Tampa Bay Buccaneers.

“I believe that’s where he felt it,” Shanahan said. “Then it just got worse on him throughout the game.”

Purdy played through the injury but departed late in the game with the Niners holding a big lead and attempting to run out the clock.

Samuel’s situation seemed more tenuous when he departed on a cart in the second quarter and did not return to the game. But the Niners had hope the injury wasn’t as bad as feared when X-rays showed no broken bones.

Starting defensive tackle Kevin Givens was another injury of note for the Niners after hurting his left knee and leaving on a cart in the first half. The team said he suffered a sprained MCL, too, and will be “out for a few weeks.”

Not all of the Niners’ injury news was good on Monday, as defensive back Dontae Johnson suffered a torn ACL that ends his season. Cornerback Samuel Womack III is dealing with a concussion and also will not play this week as he goes through the protocol.